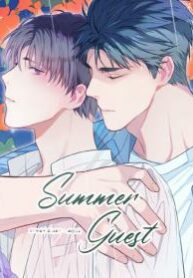 One day at the beginning of summer, a guest visits a quiet old house that is managed alone by Sanwoo. The guest who came and greeted Sanwoo in the shower rain was Eunje, the heir to the old house, a complicated city guest.A sky that was full of stars, the melting of ice cream, and the remnants of a mosquito scent that burned all night long. Two men, each other’s hearts and bodies that heat up slowly… A breathtaking recollection of a summer in the ‘90s.