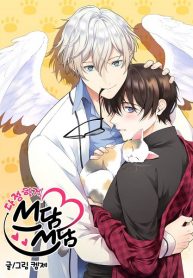 Affectionately Average 5 / 5 out of 1

Woojin, a popular score for animals that can be called a human cat, cannot get close to people because of its dark, dismal appearance and timid personality. On the other hand, Sang-yoon, the owner of the dog cafe, who appeared like fate in his eyes, was so handsome! Too bright! Too friendly. In contrast to the first glance, Woojin doesn’t have the courage to say a word to work in the dog cafe every day.